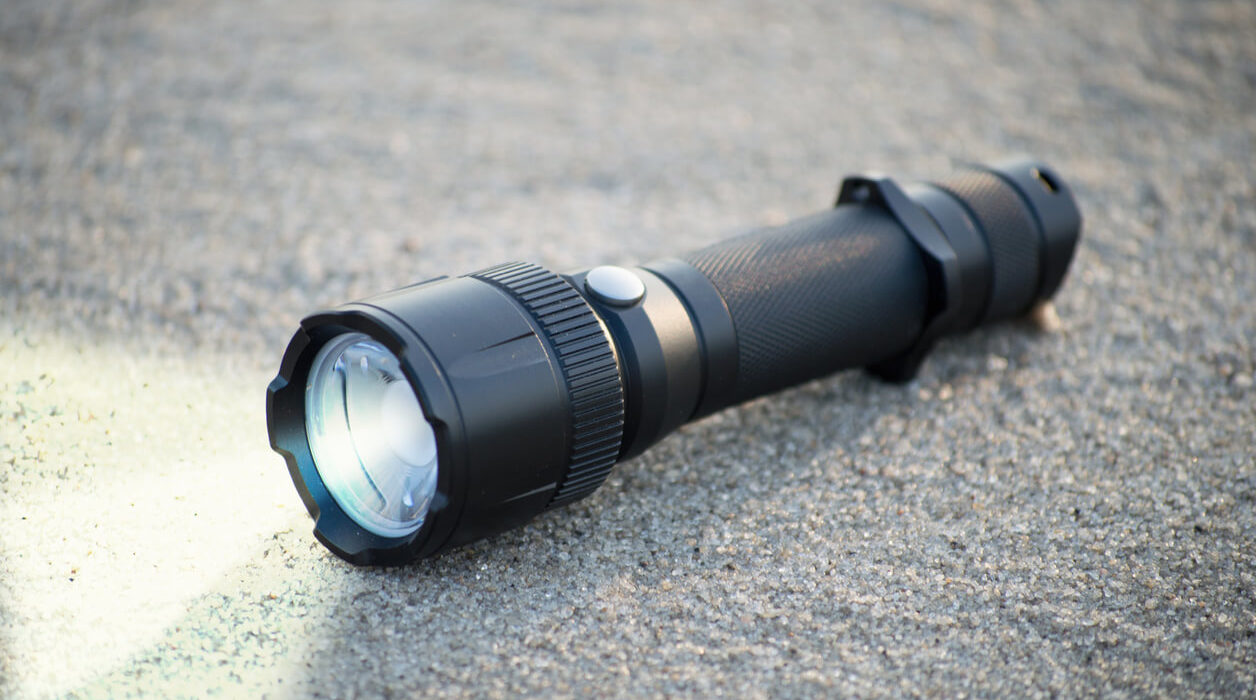 There may be a lot of 18650 flashlights in the market today, but you need to make sure that there are certain qualities that your 18650 flashlight needs to have for it to become a reliable one. Some people tend to look at the price without even looking at the quality of the Flashlight. The reason behind this is because they believe that every flashlight is the same and their difference is just the price. But did you know that not all 18650 flashlights are the same? Well, you’re about to find out the top 10 best 18650 flashlights that are available today.

So you might be wondering as to why choose 18650 flashlights since there are a lot of other batteries out there. One of the reasons would be it is a reliable Li-Ion rechargeable battery. All you have to do is to have a good connection, and you will surely be able to charge your flashlight effectively. Another good thing about a 18650 flashlight is that it is more powerful than four double A batteries due to the higher voltage that it has. 18650 can provide 3.7 volts, which can give you three times the watt-hours amount.

Another reason why you should use 18650 flashlights is that it has the same lifespan as two CR123A batteries. It also has a high capacity size ratio, and as well as a high capacity and a high discharge rate, which makes 18650 a superior battery. 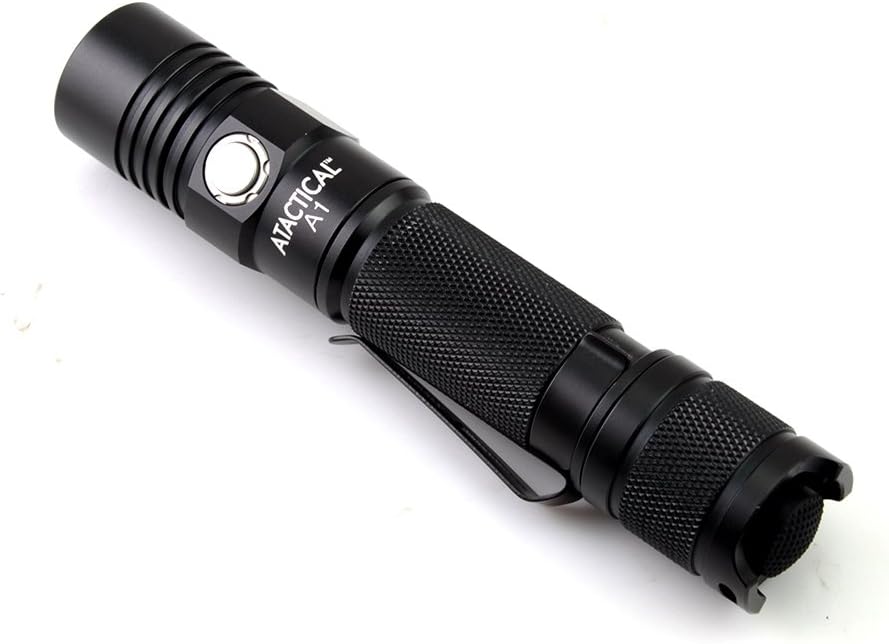 The Atactical A1S flashlight is perfect for people who are looking for a tactical flashlight that can be stored in the pockets and something that won’t break their banks. It is available in cool white and neutral, so you have options to choose from. This flashlight uses a Cree XP-L V6 LED to give the user the needed beam, with an intensity of 19,200 candelas and a beam distance of up to 908.7 feet.

You can quickly turn the flashlight off and on by accessing the tail cap. On the other hand, the side switch will let you access the different bright mode, including SOS and strobe. The Atactical A1S features a memory function, which means that it will remember the last function that it did. Lastly, this flashlight has a rating of IPX-7 rating and an impact resistant of up to 4.92 feet. 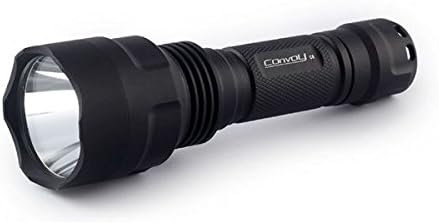 The Convoy C8 is one of the best 18650 flashlights today because of the broader head that it has. This is a mid-sized handheld right that uses Cree XM-L2 LED, which can emit a total of 1000 lumens. There are two different modes for this flashlight, wherein the first one can produce high, medium, and low brightness level. The second one is for SOS and rapid. For you to efficiently use the flashlight, it uses a tail click cap switch.

Only on 18650 battery is needed to operate Convoy C8, but you will need to buy it separately. When it comes to the battery tube, the flashlight offers spring, which is located at both ends. This will ensure that the flashlight can accept flat and button top batteries. It will also accept unprotected and protected 18650 batteries. If you improperly installed the batteries, you shouldn’t worry because of the reverse protection polarity, which will help prevent the batteries. Now, when ht battery is running low, you will be alerted using the low voltage protection. The Zebralight SC63W is less an inch diameter and 4 inches in length. It has a pre-installed pocket clip and is compact, which makes this an ideal EDC flashlight. This flashlight uses a Cree XHP35 LED, which can help emit maximum lumens of 1100. You have the option to choose between three different levels of brightness, including the strobe and beacon mode. The main level of intensity is already programmed to two different sub-levels. The second one can be programmed into the other levels of brightness.

To ensure that it will help produce a maximum brightness and runtime, this flashlight uses a PID thermal outputs. There is also an indicator alert, which will let you know if the battery is running low already. Depending on the life of your battery, the light will step down automatically to help preserve the life of the battery itself. And lastly, there is a smart interface where you can access it using a soft-touch so you can access all of the individual modes and brightness levels. Now, for people who are looking for a great throw, then the Olight M2X-UT flashlight is the one for you. This flashlight has a customized Cree XM-L2 LED, which is paired with a smooth reflector to ensure a focused light beam. Due to its smooth reflector and domed LED, the flashlight can throw a distance beam of up to 2,00 feet. It also used one 18650 battery, which emits 1020 lumens max for up to an hour. Its light offers three different levels of brightness and a strobe mode.

You can power the flashlight on and off using the forward tail cap switch. This switch can also help give you access to its momentary feature. Also, you can easily access the strobe mode and brightness levels just by rotating the head or by tapping its tail cap. The flashlight will also have the ability to recall the last level of brightness used due to its built-in memory. To make it impact resistant, the Olight M2X-UT is made out of the aircraft grade aluminum body. The Zebralight H603 gives the user a 120-degree floodlight due to its Cree XHP35 Cool White LED. It can emit 1300 lumens, which is the highest setting using just one 18650 battery. You have the option to choose amongst the levels of brightness, strobe mode, and the beacon mode. The user can program each of the levels with the use of two sub-levels, while the second one can be programmed further to a different level of brightness.

To ensure that the brightness levels and runtime are both maximized, the Zebralight H603 uses thermal PID regulated outputs for both of the highest standards. You will be alerted when the battery is running low because of the battery capacity indicator. To ensure that the battery is well preserved, the level of light will automatically decrease. Another good thing about the Zebralight H603 is that it can serve not only as a handheld light but as well as a headlamp. The Astrolux S41 produces a good light for its size since it is just three inches. This flashlight uses Niche 219B/XP-G2 LED and had the ability to semi 1600 lumens. There are two different modes, and they are well spaced so you definitely won’t go wrong. The flashlight also comes with a mode memory, but you can also turn it off if you want to. You can quickly cycle through the different modes via the tail switch’s push button. This means that you can quickly go through different levels smoothly.

Of course, the Astrolux S41 is powered by 18650, which you need to purchase separately. This battery will help increase the runtime, but unfortunately, it can decrease the light that the flashlight emits. You may also opt for the 18350, which gives a higher output but a shorter runtime. The Manker U11 flashlight is using a Cree XPL V5 LED and is powered by one 18650 battery. You may also opt for two CR123A batteries. But using the 18650 will help the flashlight emit 1050 lumens and a 16,000 intensity of candelas. It has a maximum of 827 feet for the beam’s distance. You can charge the flashlight using a micro USB port, plus it has a warning alert when your battery goes 20%. You can easily control Manker U11 via the switch on the side.

There is two user interface for the Manker U11, which are simple and advanced. The simple one will give you the five different level of brightness, which includes the turbo and the moonlight mode. It also offers three different modes, including the SOS, breathe flash, and the strobe. The advanced one has four levels of brightness but doesn’t have a moonlight mode.

Specifications Of Manker U11:
Go to top The Nitecore MH20 is using a Cree XM-L2 U2 LED, which can emit 1,000 lumens max. You can efficiently operate this using one hand because of the two-stage switch. The switch will let users have direct access to ultraslow and turbo modes, and as well as the three modes that are concealed. To ensure that the flashlight won’t overheat, cooling fins and temperature regulation are installed in this flashlight.

This flashlight only weighs 3 ounces without the battery, which makes it light and easy to carry. Another good thing about this flashlight is that it uses 18650 battery, wherein you no longer have to remove it for you to charge. The reason behind it is because of the charging module that it has using a micro USB cord through a port. The port has a cover which will protect the flashlight against moisture and dust when being used outdoors. Of course, there is an indicator which will let you know if your battery is already running low.

18650 battery powers this flashlight, wherein it will let the Cree X-L2 LED to produce 1020 lumens and a distance beam of up to 502 feet. You can control the five brightness that it has and the strobe using the side switch. Lastly, this flashlight has an IPX-8 rating, which makes it durable. Now, for people who are looking for a flashlight with a reasonable price then the Ultrafire 502B is the one for you. It has a bright light and is known to be durable enough wherein law enforcement and military personnel use. It is powered by 18650 battery, or it can also be operated using CR-123 batteries. The runtime of this flashlight will depend on the choice of battery. If you want to maximize the runtime, then using the 18650 battery is ideal.

The Ultrafire 502B can emit 850 lumens and produces a bright light that can reach 761 feet. This flashlight is made out of the anodized aluminum body with a belt clip.

Specifications Of Ultrafire 502B:
Go to top

These are all of the top 10 best 18650 flashlights today, but one that stood out is the Atactical A1S. The reason behind this is not only because of its affordability but as well as because of the compact design. You can also charge it using its USB charging port that is already built-in. No need to remove the batteries for it to be charged. So if you want something that is light in the pocket but something that is powerful, then the Atactical A1S is for you.

The brightness of the flashlight will depend on the number of lumens. Typically, these flashlights have lumens that range from a hundred to 3500. If you need something that can help blind an assailant, then the 3500-lumen flashlight is the one for you. If your purpose is to have a flashlight that can not only help you to see in the dark but as well as protect you against intruders.

Build Of The Flashlight

Lastly, you need to consider the build of the flashlight. The reason behind this is because the durable the made, the longer the lifespan of the flashlight. You don’t have to worry about using the flashlight daily, because it is durable enough for excessive use. Always put in mind that having a good flashlight will ensure that you will have a flashlight that you can use anytime. 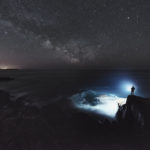 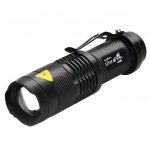